UPDATE at 6:15 p.m.: Jacob Stanley Snyder (DOB 01/31/89) has been charged with one count of First Degree Murder and two counts of Attempted First Degree Murder. He has been booked into the Clay County Jail on a $2-million bond. A booking photo is not currently available at the time of this update, but photos of Snyder as he was taken into custody are included below.

UPDATE at 3:40 p.m.:  The victim of today’s fatal shooting has been identified as 11 y/o Harley Evans . The two adults, Harley’s father and the father’s girlfriend, remain in a Nashville hospital where they continue to be treated.

At the request of 13th District Attorney General Bryant Dunaway, TBI Special Agents are working jointly with deputies with the Clay County Sheriff’s Office to determine the circumstances that led to a shooting incident on North Fork Road Monday morning that left one juvenile dead and two adults injured.

The preliminary investigation indicates that at approximately 6:30 AM Central, a school bus driver had stopped at the residence on North Fork Road, where he usually picks up two female juveniles who live there. Instead, he found an uninjured juvenile female and an adult female with a gunshot wound. The driver transported the two from the immediate area and took them to the Mt. Vernon Fire Department nearby and called 911. Clay County deputies dispatched to the scene found an adult male outside of the North Fork Road home suffering from a gunshot wound. They also found a juvenile female inside the home who had been shot and was deceased.

The two adults were transported by helicopter to a Nashville hospital, where they continue to be treated.

The individual believed to be responsible for the shootings had been staying on the property in recent days, working for the male resident. Following this morning’s shooting, the subject had been seen running into a wooded area next to the house. Throughout Monday morning, law enforcement officers from multiple agencies engaged in a search for the subject.  The man, whose identity is still being confirmed by authorities, was captured shortly before 11 AM. At the time of this release, he was undergoing medical treatment before being transported to the Clay County Jail.

The identity of the deceased female juvenile is being withheld until her family has been appropriately notified.

This continues to be an active and ongoing investigation. As more details are available, they will be posted online at TBINewsroom.com and shared via TBI’s social media channels. 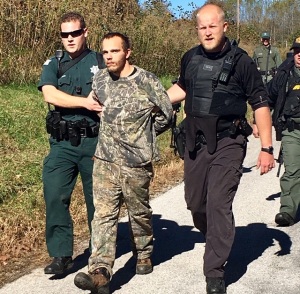