COOKEVILLE – An ongoing, joint investigation by the Tennessee Bureau of Investigation and the Putnam County Sheriff’s Office has resulted in a significant seizure of counterfeit pills that pose a potentially deadly risk to users. 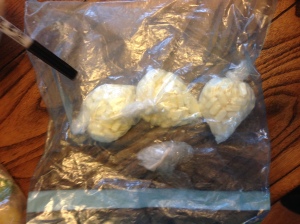 While executing a search warrant at a home in the 4600 block of Massa Road this morning, authorities discovered approximately 300 pills stamped with markings characteristic of Percocet. However, laboratory analysis performed by TBI Forensic Scientists today determined the pills instead contained fentanyl, a pain killer 50 times as potent as heroin that can be deadly in high doses.

“Previously, the General Assembly recognized the dangers surrounding heroin in Tennessee and enhanched the penalties for those dealing the drug,” said TBI Director Mark Gwyn. “With fentanyl being more potent, more dangerous, and potentially more deadly than heroin, it may be in the best interest for the state for lawmakers to consider a similar increase in penalties to further send a message to drug dealers, while protecting the citizens of Tennessee.”

During the execution of the search warrant this morning, authorities also seized approximately a half a pound of marijuana, 100 pills of Dilaudid, and a large amount of cash.

“I am proud of the efforts of our Narcotics Unit and the high level of cooperation displayed with our law enforcement partners,” said Putnam County Sheriff Eddie Farris. “This investigation demonstrates the dangers present in our community as it relates to drugs. Our citizens can be assured that as long as I am Sheriff we will continue to be relentless in our pursuit of anyone using or selling narcotics in Putnam County.

In 2014, in anticipation of a proliferation of fentanyl in Tennessee, TBI Director Mark Gwyn proposed the agency launch a program to protect Agents and Forensic Scientists who may come into contact with the drug with auto-injectors containing Naloxone, which can potentially save an individual from a fentanyl overdose.