CHEATHAM COUNTY – A joint investigation by Special Agents with the Drug Investigation Division of the Tennessee Bureau of Investigation and detectives with the Cheatham County Sheriff’s Office has resulted in the arrest of a correctional officer, on charges of transporting drugs to the jail where he worked.

At the request of 23rd District Attorney General Ray Crouch, on June 25th, TBI Agents joined detectives with the Cheatham County Sheriff’s Office Narcotics Unit in investigating an allegation that a correctional officer within the Sheriff’s Department was involved in drug activity. During the course of the investigation, Agents and detectives developed information that Correctional Officer Mason Carr picked up controlled substances and delivered them to the jail, where he worked. The investigation also revealed that when Carr was stopped, he was in possession of a firearm.

On Tuesday, Mason Carr (DOB 09/15/1996) was arrested and charged with one count each of Possession of a Controlled Substance with Intent to Resale, Introduction of Drugs into a Penal Institution, and Unlawful Carrying or Possession of a Weapon. He was booked into the Cheatham County Jail, and is currently being held in Montgomery County pending a bond hearing. 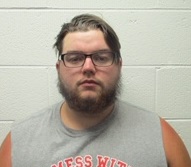