JACKSON – The investigative efforts of the Tennessee Bureau of Investigation have contributed to guilty verdicts for a second subject involved in the attempted murder of a police chief.

At the request of 28th District Attorney General Garry Brown, TBI Special Agents began investigating an incident at a Dollar General store in Friendship, Tenn. on May 18, 2012. Earlier that day, Craig Barbee entered the store, armed with a handgun, and demanded money from the safe. When he wasn’t able to gain access to the safe, Barbee ordered the clerk and a second person, off-duty Friendship Police Chief Bill Garrett, to the back of the store. There, Barbee also made contact with the Chief’s wife, then robbed the both of them, during which he shot the Chief in the torso. Barbee later fled the store and escaped with two other men, Guary Wallace and Javarius Durrell Mann. In July 2013, a jury convicted Barbee on seven counts, including Attempted Murder. In August, a judge sentenced him to a total of 186 years.

Last week, a Crockett County jury found Wallace, pictured below in a 2012 photo, criminally responsible for Barbee’s actions and convicted the 58-year-old Memphis man of Attempted Murder in the First Degree, Especially Aggravated Robbery, two counts of Aggravated Robbery and two counts of Aggravated Assault. He will be housed in the Crockett County Jail until his sentencing on August 18th. Wallace faces the possibility of 120 years in prison.

The third subject involved in the crime, Javarius Mann, has not been charged in connection with the case, but is currently wanted on an Absconded warrant by the state Probation & Parole Office. 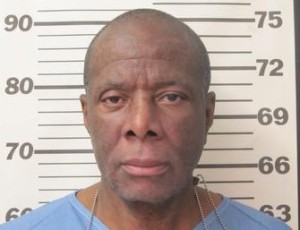